My Tryst with Pondicherry and It's adopted Son Prof. Manoj Das 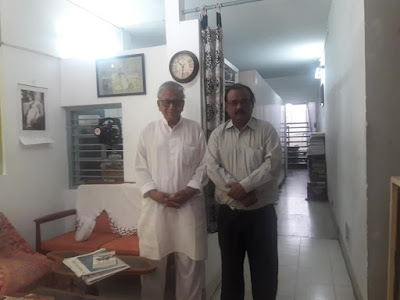 Whole world conspires to fulfill your dream if you have a longing for something without expecting anything in return,I mean, selfish in spirit.Prof.Manoj Das, the renowned Indo-Anglian writer came into my life during the days of graduation.Once I chose a book from our college library was on Sri Aurobindo and it was authored by Manoj Das. That was the very first time seeing his name and which appealed to me in an enigmatic manner.His style of writing had some magic and enthralling capability.

His books were read in later years also,of course with judicious intervals amidst my head-load of works.Among which 'The Tiger at Twilight (novella),The mystery of a missing cap (Stories) and selected fiction (Stories) are important to remember for me as they carried some flashes resembled  to my experiences of childhood. Especially 'Farewell to a Ghost' story is one that haunts right to this moment. It engulfed into subconscious level for its powerful presentation. 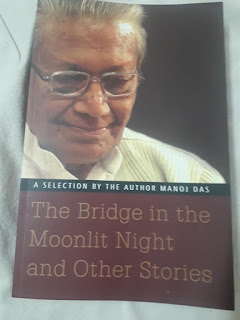 And I shouldn't forget Dr.Kulamani Dash, a staunch admirer of Manoj Das who rushed me a book titled 'The Bulldozers'. It was a melange of  diverse colors like sarcasm,comedy and a love story turned into a tragic situation at the end. All these are created by One great writer of our times and a resident of Sri Aurobindo ashram. He conferred with Padmasri,Kalidas Samman and many many  honors.A columnist for many publications like The Hindu,The Indian Express and The Hindustan Times. 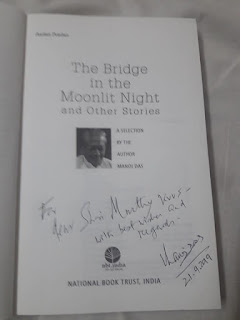 Fortunately, I have met such a remarkable author on the 21st of this month at his residence. It was in Dupey road,Pondicherry. All the surrounding streets are having the Exotic French names. After having visited 'Maha Samadhi' of Sri Aurobindo Maharshi, knocked the door of the gentle man. He warmly received me and we have talked almost half an hour,though I was given ten minutes of appointment. He appreciated my book's cover page art when I presented him my latest title 'The Riverside Man & Other short stories'. He got amused on knowing that the art was drawn by a Bureaucrat named Sri Vadrevu China Veerabhadrudu. 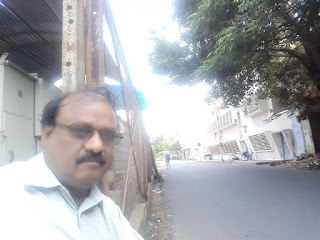 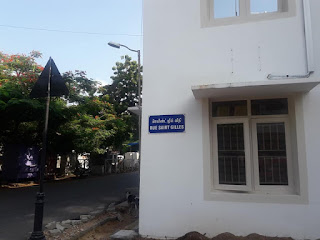 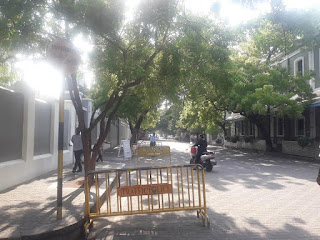 I aspired to have clicked some monuments,library,sprawling heritage sites inside but photography was prohibited.Many people were in meditation beside the Maha samadhi of Sri Aurobindo. It became a global destination long back.Many tourists seemed to be from various parts of the world. What a calm,serene,greenish and beautiful place filled with glorious aura..! Apart from it, Pondicherry is creating abuzz as an important educational hub. Environment is clean and the sea breeze let you feel comfort anywhere in the city.
Posted by Murthy K v v s at 11:08 AM