The Dark Arena : A novel by Mario Puzo 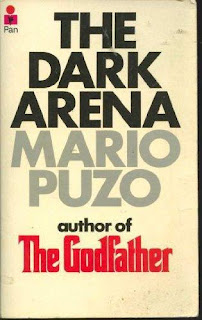 I resumed reading this Puzo's novel in a journey. In fact, I should have read it long back since myself was and is an ardent fan of him for many of his deceptive tale telling techniques. This novel sets in the backdrop of second world war. Walter Mosca was a young war veteran of American origin. He returned to Germany after a few of days spent in his hometown,refusing a marriage proposal from Gloria. He also denied his mother's advice to settle down in a different way.

One fine morning, he sets out to the war zone of Berlin. Mosca met his German girl friend Fella again. War rules don't permit a relationship with local people. But you know love is blind as the age old adage goes by. In course of time, Fella became pregnant and gave birth to a baby boy. He started his efforts to take Fella and the son to the US and for which some important legal papers to be approved by higher officials. There were some people who keeps playing against it.

The real troubles came upon while Fella caught up with he health problems. Military doctors were to  answer their superiors when they treated outsiders. It made the couple irksome to come up with their real identities. Mosca compelled to have drugs by adapting foul play or she would get affected miserably. Surprisingly, the most wanted currency then was not dollars or marks or anything else,but American cigarettes. In black market, those crates have great demand. He exchanged them for medicines. However, his son and girlfriend died due to the timely medical treatment at the bay.At last, he returned to the US  leaving his second son with a care taker in grief.

What Mario Puzo did want to tell us by this piece of work..? Well, the cruel face of war surfaced with many implications. Not only that, the way how Germans were being treated by the victorious nations was also described. Frankly speaking, this would nothing to do with Mafia like themes since Mario Puzo was acclaimed for his crime,manipulation,betrayal and Mafiaso saga.This novel had been written in 1955. That means his very first novel and it saw no big success comparing to The God Father. Perhaps he could have shifted to the genre of crime fiction seeing its fall.

But for some curious reason,I liked it for its quality of warmth,war time love and historical importance in descriptions. It showcased a different Puzo in spirit. He could definitely have inspired from Dostoevsky while he was writing some parts dealt with psychological suffering of the lovers and societal indifference towards human values. ---Murthy Kvvs
Posted by Murthy K v v s at 7:53 PM