The Bulldozers : A review on Manoj Das novel 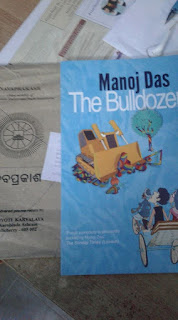 The Bulldozers, a novella authored by Manoj Das.Needless to say about his indomitable writing skills as a bilingual author.This story serialized  in the prominent publications way back in sixties yet,has its own relevance with the present day.It was a satire on surface but a chord of compassion strikes somewhere in the heart of reader,we remain clueless who to blame at the end.However things went that way in the mundane world.

Let's get into the story.Ravi was a library in-charge in a modest town.The library was a private one founded by Roy institute.His dream is to have a house.Ravi also works as a small time reporter for a local daily called Simhanaad to earn some extra bucks.One day,a gentle man Rabindra Mohan Das came to his library with a recommendation letter from the trustee and his wish was to conduct a meeting in the memory of deceased writer of letters to the editor , late Pran Mohan.He checked auditorium,mike and chairs for the forth coming event.

Pamphlets  distributed widely and one Prem Nayak has been fixed as the chief speaker.Alas,on the De day ,no body turned up to fill up the seats.Even including Prem Nayak,Rabindra Mohan Das was suffering from fever and his message was sent through his grand daughter Geetha.Both have bound to finish the meeting without any other person.Here the description was hilarious  that how literary events went on with high sounding jargon even while attendance of people was zero.

There was another episode of  Sahitya sabha , conducted by central government,for which Ravi was made secretary to lead the committee.Writers' verbal fighting over different opinions display inside politics of people of letters.And this hullabaloo made municipality workers bizarre and ultimately astonished by knowing it all a theoretical discussion.

Ravi and Geeta got married at last and bought a house to start their life.On the occupation moment,there was a great problem never expected welcome them.Bulldozers keep hitting his new found home.With full police security.Then he understood how he got the house at the throwaway price,the owner concealed the truth of demolition orders from the authorities.

Almost every page packed with humor and satire which spoke volumes of every day life experience.Humans true behavior revealed in the carefully chosen characters.Every budding and veteran writer showcased quintessentially.Through a lot of chuckles , this will land up the reader into a melancholic plane as how innocence was harnessed to have hell of a headache.

Once again, thanks to Dr.Kulamani Dash ji for gifting me this stupendous work of Sri Manoj Das.
Posted by Murthy K v v s at 12:36 AM