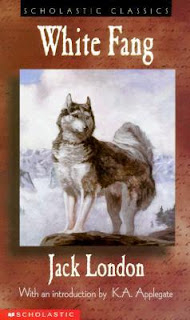 " White Fang " is the book which I have read some days back and It makes me changing my perspective about bovine world.It's all about a wolf - dog in brief.Transforming from a naive,cute and cave ridden puppy to a ferocious fighter in the betting games.Also he traveled to San Francisco with his new master and learned how to live in compact along with other pets and people.It's author Jack London keeps us engaged all along the story telling,of  which an animal voiced his woes,pleasures,struggles some times more fatal  incidents that could turn one meeting death for sure.

Jack London style of telling is objective.And the wolf dog was no way inferior as a whole comparing to any human being to have led an eventful life.White Fang was a hybreed offshoot,born for a wolf and a dog in the forests of Arctic area.So his appearance,strength and swiftness was different.Gray Beaver, his first master gave him that name in the woods.As a puppy, White fang was happy in the cave and his meat was provided by the mother.

He often touches the walls of the cave to ascertain the length and breadth of the world,after some more days he realized that there was unknown space outside it as there were rays seen coming through the entrance of his cave.Gradually he keeps going outside and trying to eat small birds,eggs and reptiles.But a lynx suddenly attacked it to kill,fortunately he got helped by his mother's timely arrival.

White fang learns the first lesson that he should not overpower bigger animals and confine to only small ones.As months go by,he accompanied his mother in acquiring food,one fateful day both were caught by two human beings and brought to the camp where he met other dogs and internal fights were started.Lip-Lip was another one that always tried to bully White Fang whenever he chanced upon.

White fang learns tricks to avoid Lip-Lip and kept sinking his sharp teeth on his enemy when his mother was around.He grasps how to obey his master to get more meat.He grows well and his muscle,bristle and knack for fighting got improved.No dog  challenged his power as he would kill anyone in minutes and he also came to know that he was a special creature with his enviable intelligence and strength.

His demand makes his master to sell him another one for profit thus he was brought to Yukon to fight in betting games and that got his new master rich.But White Fang receives severe wounds now and then in addition with clubbing by his master.In one fight, he was near to death.At that time, he was brought by another human master to land in San Francisco.This was another kind of world.Here I stop for a reason,simply to make you enthusiastic about forth coming events. Sure you appreciate the skillful  work of Jack London for his keen eyes for the world of animals.
--Murthy Kvvs
Posted by Murthy K v v s at 9:36 AM