A Walker who refused to get tired..! 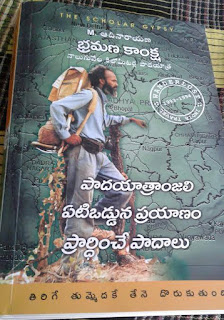 Let me introduce a book here and which will make you aware of its author with his own mission.He is a  unique  traveler to scale  distances by his foot only.His name is Machavarapu Adinarayana.A retired university teacher,residing at Visakhapatnam.After having read  his "Bhramana kaanksha" (Wanderlust),composed myself to write a few words about such  gentleman.

His legs are his trusted soldiers.He walked 4000 k.m. and penned all those  exhilarating moments in the book.Sounds quirky..? yes.. There were three trips elaborated all through the book.The first one,which had been taken up from Visakhapatnam to Darjiling,where the tomb of Rahul Sankrityayan,the renowned scholar was placed after his demise.Our foot  traveler payed his respects there by  walking off all  the way via Andhra, Orissa and West Bengal.However Darjiling  is extreme north part of Bengal.

The people he met in all these places were  different in their own way and regaled the fabric of our nation.The hats made by  rural folk  of Sompeta in Andhra were of unique quality to withstand the rainy season.At Ganjam of Orissa,he was received well  by a family and at the same time  marked by a menace of thieves.Khandagiri monkeys' behavior described.Richly decorated architecture in the temples made our traveler tempted to be there but denied it unwillingly to pursue his walk-journey since every moment was valuable to reach the destination.

He entered the  Bengal state via Bhadrak and other places.Kudeghars,the two storied village buildings in the state were typical entity with animals and humans existence hand in hand.Telugu diaspora at Kharagpur was almost  foreseen.Flora and fauna,chirping of varied birds,Dhabas  at  waysides,and with myriad  colors of experiences  reached Darjiling  and Rahulj's tomb.This was  1500 k.m. walk altogether.Fulfilled in 38 days.

And another one was 2300 k.m. walk from Chavata palem,his native place to New Delhi.This was done in the memory of his deceased sister who worked in army hospital.All this,he traveled through Chattisgarh,Madhya pradesh,Rajasthan and Haryana.We would  literally be with the walker all along the way he conceived  with not less than a mini India.He also had taken up 300  k.m.  trip and which had started to reach the origin place of Gundla kamma river.

Travel on foot is synonymous with Adinarayana in Telugu states.These were a few words indeed on his book.The Rest to be known through reading it only.Astute planning with persistence brings success.More over, the passion works as a key factor in any pursuit.That's what one could understand from this scholar gypsy.
Posted by Murthy K v v s at 12:17 AM