Autobiography of a Sadhu (An Angrez among Naga Babas) : A Review 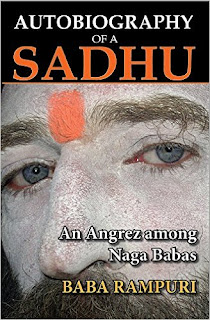 At last finished reading of the book written by Baba Rampuri.Of course,the American expatriate who wanted to become a Naga Baba and experiment his life with wild and ancient order of India.People usually see their naked pictures while Kumbha mela in swing in order to have muse along with any other happening.And no one after that would get followed to know about it further.That's what happens with people of this country.But an American wished to be part and parcel of it to inquire deeper and deeper of this order.Then what happened and how things went for him is the all about this book in almost exceeding 250 pages.His account about meeting his Guru Hari Puri Baba and austerities observed there was given vividly.

Initiation ceremony took place with five Gurus by offering Rudraksha,Lingoti,Vibhuti and other things to this person and an vow was also taken to not retreat under any circumstances.Naga Baba tradition he now belonged to  the Juna Akhada.Yes,there were lineages as many as some fifties.Each akhada has its own senior leader.He receives respect duly  in the matters of initiation and leading all other spiritual pursuits.The Guru  of Baba Rampuri as you know is Hari puri Baba fortunately knows some English,not only that Italian,Spanish and other few European languages.He also calls Crows in their language and feed them eventually.

Our Rampuri Baba interested to know occult and other secret knowledge.But Hai puri Baba shuns noting mantras by Rampuri Baba because learning mantras through the chanting of Guru only powerful rather than dissection of it.If you do so,there will be nothing except hallow words.Despite of it,he made thousands of pages on what he lived like.There was an opponent Guru called Bhairon Baba who dislike the arrival of a foreign one into the ancient fold but Guru Hai puri Baba never cared his word.

There were some miracles cited in various situations.His Guru Hari puri Baba appeared when he was paying respects at the tomb in a throne.All this happened in the night when a storm like atmosphere prevails.The importance of Ganja is known among the fold.Our foren baba met a chiristian Sadhu named Patrick Baba who behaved eccentric and people belief in him to ward off evil spirits is amazing.They lived together in different caves for some time.

The prose he selected is easy to understand even to a layman and entertain the reader at the same time.But there were links to adjoin and doubts to solve that we bound to feel whenever keep reading it.Our ancient traditions require unconditional surrender to the Guru  when learning these sort of things,mere exploration tendency not to be worked out in the issues like it.Narration is great yet lacked some soul.West and East are like two lobes in our brain.West is for worldly things to explore and East is for inside world and they would be masters in their particular parts only.That's God ( or Super power) ultimate judgement.That's what I felt after reading it.
Posted by Murthy K v v s at 2:58 PM