A Writer Penned more than 1000 novels 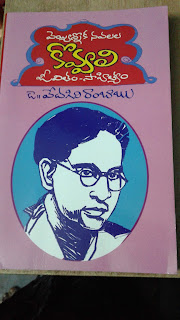 Perhaps his name should have been on the list of  book of world records for being the most prolific writerthe name Kovvali might not have evoked thoughts those who do not access to Telugu languageeven the younger generation of present time Telugus hardly know the name since most of his novels are not at disposal for several reasonsBut he created a record by penning more than 1000 novelstruethe older generation still lost in memories whenever his name come up on any occasion.

His full name was Kovvali Lakshmi Narasimha Rao( 1912 - 1975) and he was popularly known as Kovvali.Detective,social issues,Tragedy,Comedy,Romance,Folk,reformation,Women welfare whatever the theme was not left of his observation.Kovvali almost touched every interesting topic of the human psyche.He made no reservations choosing the subject.And one more thing,his peak time was 1935 to 1975.Every thing he wrote turned into gold by attracting scores of readers.Kovvali had chosen simple style to reach his writings to the common reader.Those were the days strictest traditional style was only honored and the rest was treated as no worthy literature.

entirely trespassed the rule and his only aim was the common readerhis novels always at the limit of 100 pagesthat means the reader should enjoy and enlighten in the possible limited timeYeshis foresight was proved rightHe contributed a lot in terms of reading habit among Telugus in  generations and the due credit should be given in this respect.

Every new beginning has its own woes.His first novel was Palle Paduchu ( A Village Belle) ,received moderate success and he was struggling with successive novels.One day a miracle happened,see,every man's strong conviction receives God's blessings.He gave a new script to a publisher based at Rajahmundry, Veera Venkayya & Sons, but the publisher was pondering over its success ,then a postman came to the publisher to deliver the daily mail,eventually read the script on the spot and said to the publisher "sir...this kind of   novels look very good and time saving,not only that a great entertainment too".

The prudent publisher understood the inner message of the unwelcome readerAnd published it and circulated at the bus stations and rail stationsAll the copies were sold and in addition the readers asked for if there were any books like theseImmediately the publisher gave advance amount for more four novels and Kovvali obliged it happilyHis only mission was writing for the life he realized  it. Not only thathe honored the destiny.

He shifted his base to Madras and wrote six cinema , Talli SanthiMaa GopiSipayi KuturuBeedala AssthiSri Rama Anjaneya YuddhamInterestingly, his story titles were also very intriguing like Dancing girlDoctor's wifeVagabond princeChurch bellBurma lady and so on apart from Telugu titlesAt times, Kovvali wrote one novel in one day the publisher's request within a night he finished one or two novelsThat was the incredible market for his books in those times.

During 1935 to 1975he had penned 1001 novels in Telugu and rocked the generation with his thoughtsespecially Kovvali along with his popular style adopted the sense of women's freedom and progressive outlook in his writingsFortunately Vedagiri Rambabu brought out a book on Kovvali this year and that uphold his life work in a befitting manner.
Posted by Murthy K v v s at 2:11 PM