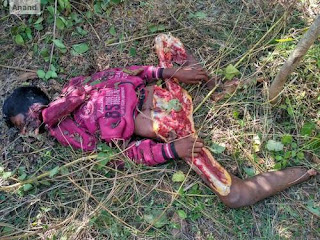 Some pictures trigger shock waves through our body and those were inevitable sometimes to initiate required steps in the days to comeHere, I am presenting some photos which will take you to another level of scaringIn factthis terrific incident has taken place in the district of Kanked of Chattisgarh stateA boy was attacked and killed by a leopardnot only that it seems the lethal animal had pierced the poor one from the bottom as it had liked to get pieces. 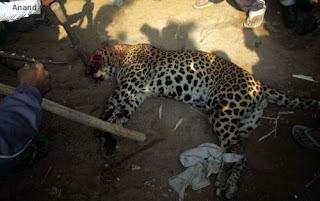 How can one outplay a Cheeta when it confronted in the forest..? It's not a cinema to let it get pounced and kill at onceThe reality is always a different storyYou have to hide from its sight or you should be armed with a powerful rifle to face itbeyond it allcourage is the prerequisiteOr it's not so easy fighting a leopard or tiger as they have the capability of striking with a lightning speed. 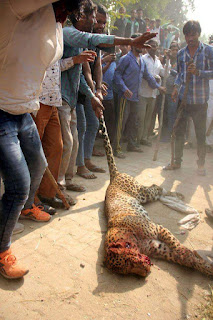 Here, in this case that's what happened with the photograph and in other pictureswe could see the body of the , guessing  it was killed by the irate mob by using all possible tactics. That's not too easyhowever the panic has been seen in the picsThe pictures actually belonged to our friend MrAnand of Andhra  journalist and displayed here for our blog readersYou could raise a question that how Chattisgarh state news should be placed in a Telugu dailyYesIt always does happen every time as our temple town has the boarder with it.

Kanked and other districts of Chattisgarh used to take its own share of news in our district editions due to its proximityAnd the lion's share of news about the encounter of Naxalites or vice versaIn factthe state should be cynosure of their handicraftspristine tourist destinations and unique cultural display, and what to dopeople like stereotypes all the way.
Posted by Murthy K v v s at 1:42 PM