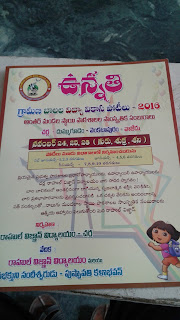 November month, perhaps rightly be called as the season of  joy for children.Yesterday at Kothagudem, the three day  gigantic Celebration of Balotsav inaugurated and which has been much talked about as it is the 25 th year of the do.Children have come here from almost 5 to 6 states to participate in different competitions.In the line of it,several people got inspired to have their own programs to cheer up the kids' world.Rahul Vignan Vidlayam ,based at the village of Charla,came forward in the form of "Unnati".These competitions are confined to the children of four mandals only.This is to be the initial move from this place and response expected in a befitting way. 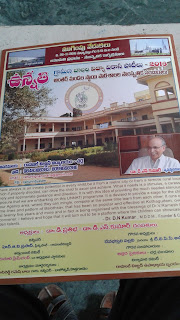 Entertainments like these would help the kids to showcase their innate talentsEvents are umpteeneach one has his/her own choice to participate and of coursethere will always be a teacher's or parent's coaching as wellLast time I have visited Kothagudem Balotsav and found it very busy with concerned activitiesJudges were drawn from the circle of well known writers and children's activistsThat massive event with the participation of some thousands of children should be described as an eye feasting oneindeed.