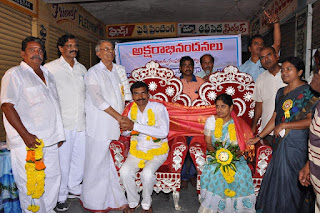 Having accomplished Ph.D in Hindi literature ,that too, from a non-Hindi region certainly be a remarkable task ,said Sri Talluri Panchaksharayya ,a well known philanthropist and Bhadradri Balotsav Chief patron.He participated and delivered key-note address at the gathering held at Bhagavan sweets complex.Sri Mandava Subba Rao in his speech appreciated the relentless efforts of Sri Veedhula and also opined that taking the subject of Humanism in  Sumitranandan Pant's Hindi writings was a walk on tight rope and his work can be useful for future generations for having an insight regarding the stalwart.

The best of  Telugu literature should be translated in to Hindi and the best of Hindi literature has to be come in to Telugu, responsibility now with Sri Veedhula is manifolded in this accord.Several well wishers and friends thronged the meet in large number and felicitated the couple of Sri Veedhula Rambabu with shawls and garlands.Ms.Thotamalla Rama ,H.M. of Sarapaka high school presented new cloths to the couple. 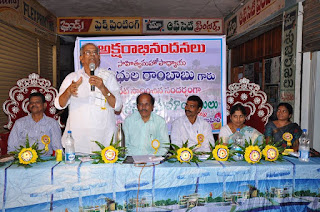 Telangana Sahiti members,dignitaries of the town,well wishers and colleagues turned up in a massive way to felicitate the scholar. He responded in a befitting manner for the laurels came from the people.Sri Rambabu briefed his background,efforts and other things in a lucid way.His research was guided by Prof. Indira Srinivasan and several Hindi scholars like Dr.Manjunath Ambil appreciated the way he presented the subject matter.