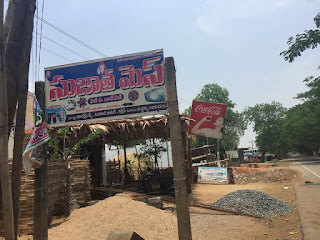 Vamsi is another name for showcasing the beauties of river Godavari and everyday life characters from typical Godavari in his moviesHe has his own way of dealing in terms with making moviesNot only that, he kept writing about his visits, especially the small time hotels that sometimes deliver wonderful food with their own kind of  preparationsMaybe they seem small but offer surprisingly great itemsVamsi wrote about many of its kind earlier, in several papers along with FB postsThus they became well known overnight at shoestring budgetnoabsolutely at no advertisement expenses. 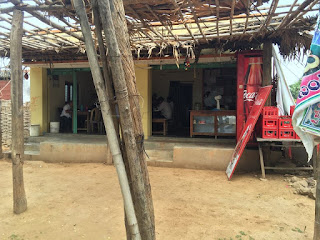 Recently he visited a hotel called Sujata Mess located at , once which was in the part of Bhadrachalam division and now merged in Andhra as the part of the Polavaram project hit area. The hotel management was appreciated by him as they served their best items like  curry with mango mixnon-veg curry and other delicaciesHe also uploaded some photos of the occasion and they have been  here for our blog readers.

Things like this are a great relief from drudgery of bustling routine. Having rounds to the obscurely known places in search of draped in fine cooks let the world know a word about the connoisseursThere could be a knee-jerk response if the more follows the suit.
Posted by Murthy K v v s at 11:41 PM