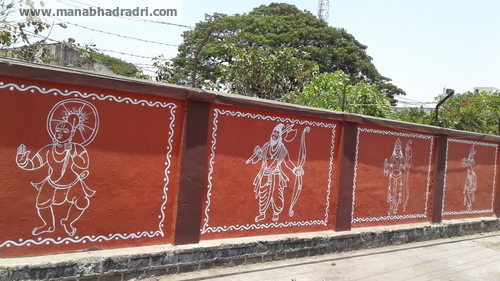 Facelift is the buzzword now,whether it is an entity of a town or human being.The important walls located at significant places adorned with eye feasting mural painting.All they are depicting the scenes of mythological importance,here on the wall of bus depot ,we keep seeing some Avataras of Vishnu.Vamana,Parashurama,Sri Rama and Sri Krishna and the rest are not to be seen due to camera view selection.Backdrop color taken was pink and the picture in the color of white.That's a sign of prudent idea since the wall is always vulnerable to outside swirling dust borne of heavy traffic.

The walls selected for murals are college grounds,tourism hotel and other places and these are worth having because of its public attention,pilgrims also get enjoyed of the ambiance.Earlier,all these walls were being pasted by messy and muddled posters of  different interests.Seldom,obscene too.They have at last turned in to a meaningful and buoyant space altogether.Last but not the least,Mural painting is as old as the caveman,but modern trend began with Mexican art movement.