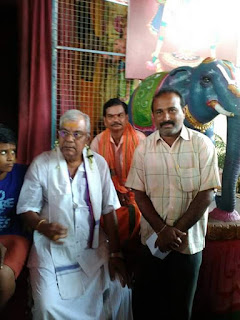 Srinivasa Rao Kota needs no specific elucidation amongst the cine-goers of  Telugu spoken world.A multifaceted artiste proved his mettle through innumerable characters.He enacted in more than 650 movies,mostly in Telugu movies,though he screened on several Tamil,Hindi and Malayalam flicks.Visited Lord Rama's temple at Bhadrachalam a couple of days back,along with his family members.Kota was his short name with which he got fame irrespective of age group concerned the film goers.

Be it a role of under played or arrogant villain or comedy or any kind of character,Kota justified all of them with his own sizzling dialogue delivery like a cake walk since he could have come from the drama field.He started his cine career in 1978 by acting in Pranam Khareedu,a Telugu film.He had been honored with Padmasri in 2015.Also served as an M.L.A. during 1999-2004.
Posted by Murthy K v v s at 2:37 PM