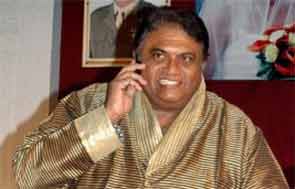 Noted Telugu film artiste Jaya Prakash Reddy entertained the audience of Bhadrachalam with his captivating performance.His specially chosen play "Alexander"  lasting 100 minutes with only one artiste it's none other than himself unveiled yesterday in the junior college grounds of the temple town.In one sense which can be called monologue,yet, the voices were heard from back ground supported him to carry on the play with gusto.All those voices were rendered by best known film artistes.So it  added further spice to his eye feasting performance.

It's no way connected to the Alexander of historical fame.The theme conveyed multiple messages brilliantly with the character of Army major (Rtd) Alexander who preferred to live on his own terms.He keeps helping needy people through  his phone counselling and indifferent to be in the house of his son.The entire show carried on without any boredom though there was only one character on the stage.Writer Pusala must be appreciated for the quality of dialogues and theme.

Stage decoration is simple but enough to prompt the mood of the concept.Jaya Prakash managed so well as a good samaritan major and his histrionics revealed perfection in invoking desired applause from the audience.It was said to be the performance wise 61 .Going over  theater to give performances although well settled with cinemas displayed his true love towards play craft.All segments of people enjoyed a lot the play as there was no ambiguity or verbosity in the telling.

He wanted to give 100 performances of this play although he is now at 69 age wise.Let his wish to be fulfilled and the medium of expression reached to its zenith as it has been dwindling with the advent of Tele serials and other hogwash pictures.Altogether we should put it a success of culminating varied techniques of mixing and voice overs meddled with brilliant acting skills of Jaya Prakash Reddy.Definitely J.P. 's name will be inscribed in the history of Telugu drama nonetheless of his cinema career for certain.
Posted by Murthy K v v s at 7:26 PM