A Review on "The Last Labyrinth" 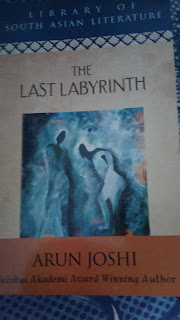 Arun Joshi , probably not known well enough as we do it with R.K.Narayan,Raja Rao and Mulk raj anand in the sphere of Indian English literature. But he deserved a place in the realm of fiction concerning Indo Anglican arena.Arun Joshi born in a traditional brahmin family of Varanasi and he studied industrial management in U.S.,after that he returned to India to assume high positions in corporate World.His passion was writing and continued it with great conviction.His style was simple and shrewd but plunged in to rare depths of thoughts,his allusions,metaphors and word coining are entirely different to spin his own transcendental  plot that revealed his inner urge for cosmic reality.

Theme of the novel was about corporate strategy to overtake another company.Yet it needed characters like Som Bhaskar,Aftab and Gargi and so on.And of course Anuradha.All the theme seemed as outward conflict of human beings but which had a wrapped meaning in the struggle of  gaining love and company shares.Every dialogue has its own connotation that could touch who has such open horizon .

Som Bhaskar was the principal character who was a millionaire industrialist eyeing  the company of Aftab plastics.Aftab was a descendant of feudal lords worked under the Mogul emperors.He was the owner of many buildings in the Varanasi ,by the way all are so old as his historical background.Bhaskar met him at a star hotel and they talked some business.His passion grew about Aftab's lady called Anuradha ,once a famous starlet.The relationship between Aftab and Anuradha was enigmatic.

Anuradha knew Bhaskar's passion but remained calm without making any forward step whenever Bhaskar visited the haveli of Aftab located at Varanaasi.Bhaskar was living at Bombay with his wife and two children.Bhaskar always felt the haveli of Aftab as a mysterious labyrinth as it was having a number of rooms and corners with its own miasma.He keeps coming to haveli on the pretext of shares but in reality for Anuradha itself.There was developed an unspeakable bond between Bhaskar and Anuradha.They talk together and smoke together and it goes on.

Aftab too not so envious about theirs,but he has his own entanglements.Anuradha had a flashback .Poignant to say.Bhaskar was in confusion about the relationship of Aftab and Anuradha.Anuradha played a hide and seek game with Bhaskar when he falls ill.But it was for his welfare.At any cost Bhaskar wanted to buy Aftab's shares ,curiously they were with a person residing in the Himalayas.So he started his journey towards..Himalayas..! What happened next...one has to read it for the true excitement..!So I stop it here..!

Arun Joshi's style in making phrases is so novel. How an Indo Anglican writer does take his own words to suit his ambiance with conviction should be seen in him..!Sentence framing is terse but tempting.Adventurous the buzzword, in other words.Transcendental  theme has been  chosen and told in the light of human day to day life.Writer starts the novel from Anuradhapura of Srilanka and the connotation reveals forth coming of Anuradha character.Socio economic and cultural issues judiciously blended with metaphysical thoughts.
Posted by Murthy K v v s at 3:55 PM