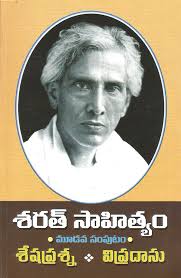 The name Sarat chandra is quite familiar among the readers of Telugu folks and it was given to the number of children with fond remembrance ,is it not enough to make a writer honored with eternal  love and reverence,perhaps even no vernacular writer got such fanfare through his writings.What made him so special in one generation, I always ponder over the question ,yes ,after reading one of his novels "Sesha Prasna" ,written way back in 1930s ,understood his real contribution to the society of down trodden and the elevation of woman's problems.If I am not mistaken, Sarat babu was the pioneer in upholding hidden corners of the woman world.Definitely the work had to be faced its own opposition as which was not so easier in the times he lived,almost a ninety years back.

One friend gave me the book,  reprinted by Visalandhra  publishers .Translation of Telugu seemed good to proceed further but I can't say it's super fine.Even with that quality,theme he conceived was something to intrigue with it's own flavor ,be it the ambiance of Agra,where the so called bhadralok of Bengalis and their lives,enjoyments,complexities,sacrifices and intelligent discourses on different issues would take the reader in to exotic world.Even the principal character Kamala never ceased to haunt you with her  arguments with Ashu babu,Ashutosh babu ,Harendra and all others.The questions she raised were relevant even to this moment.It showcased the brilliance and foreseeing of the writer.

Kamala, the character was so strong with her conviction about life.She led a life of playing in the world what practically viable with things and her discourses flamboyant sort  even to this generation.That evokes admiration sometimes and bitchy sometimes.Sarat babu stood for change or reform in nutshell.All it reflected in the novel.Also mirrored the profound patriatism  with the characters of Ajit babu and Rajendra babu.Mallika and Neelima are  both typical in their own rights.In brief,discourses played a major role all along the novel.Sometimes those excelled the times of the writer and certainly it displayed the authority and prophesy of Sarat babu.

One should accept that Sarat was not a writer by chance or hobby but with a life he had seen and moved in his experiences proceeded with utmost desire for presentation,that's why his narratives take one to another plane without any second thought.I don't know any other writer like Sarat Babu in the past or present moved all the country with their thoughts having no language barriers.Because the life's underneath ,no language, only  the feel  whatever you name it.
Posted by Murthy K v v s at 2:06 PM