On that particular day at Motigadda 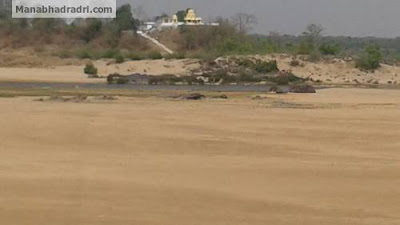 Let me take an opportunity to tell you about  a shrine that located amidst river Godavari and which will get busier and swarmed with scores of devotees on the eve of Mahasivaratri.Remaining all other days in the year looked desolate with hardly any people to visit.Exactly it appears like an island amidst flowing Godavari.We may see here sandy terrain and some oasis like water stock.In the scorching summer the scene looks so,but as July and August entered,the story would be quite different.Godavari displays its full torrential capacities with no sand to be seen on either side the banks.The floods test the peoples' patience as they have to be plodded for safer places.

The shrine above is called Motigadda Veeranna temple.It is just 3 k.m. away from Bhadrachalam and one has to walk nearly 1 k.m. in the sand to reach the temple.The presiding deity is Veerabhadra Swamy with the consort of Kaalika Mata.The temple had been built in the time of Kakatiya dynasty.The colonnade of inner structure gave evidence for that but mostly now it got renovated .Even at the time of dreadful floods taken place in 1983, the island bound temple never submerged and no doubt you can not go there in rainy season. 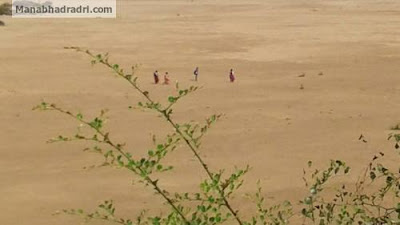 After many years of abstinence happened to go there on the day of Mahasivaratri.Indeed that particular day equaled to rest of the all days in the year.Because large number of devotees throng  there to offer obeisance as which is the most holiest day .Even night too reverberated with the chants of devotees and the whole night is observed as sleepless night ,with starry sky and cool breeze the souls soaked in eternal peace.But after that day,the story is as usual and the temple remain so calm with hardly any people attend there.