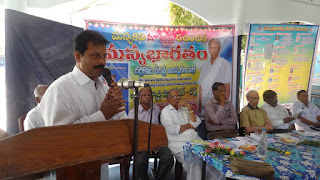 A book depicted the outline of Fort of Charla village "Manya Bharatam"  released at the premises of  Rahul Vignan vidyalam,Charla.As of now,the fort is not to be seen as it has been vanished due to the odds of natural calamities and negligence of the public.Almost 30 years back,there were mounds and debris laid signs but all those were,at present, hardly traced out as the new constructions have taken place there in the location of Pata Charla or Old Charla.

Sri.G.Gopala Krishna briefed the subject of the book.School's founder Dr.D.N.Kumar released the book and other book lovers such as Sarvasri.T.Siddulu,CVK Rao,N.CH.Chakravarti,Ventapalli etc., attended on the dais.Writer Malyasri's work was lauded by several speakers.Hope it would spread light on the bygone era's details and things that draped by merciless time.
Posted by Murthy K v v s at 5:02 PM