Albert Camus and his Book 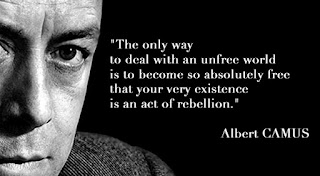 Albert Camus , the French writer's name reminds one the term Absurdism.His works translated to almost every major language including English.He was born in Algeria and had university education there,though originally a French,he had lived most of his life there as Algeria was then an integral part of France administration.What Absurdism meant by..? roughly wildly unreasonable in simple words.The complete oeure of him perfect example for that and the word first coined in one of his essays.

Let me tell you about the novella "The Stranger".Happened to have gone through it in the recent past.The principal character was Meursault and he was working in Algeirs.A telegram brought a sad news one day that his mother had died in the old age home of Paris.He started his journey in a bus for funerals.He was no sort of  severe melancholic about the happening.Everybody is bound to be died and so his mother.His behavior stunned the  inmates of the home and the warden.He remained calm there waiting for the last rites.Refused the request made by the coffin attendant whether he was to see the body for the last time.Lingered awhile in smoking .

The following day,Meursault returned  to his working place and assumed the daily life as usual.His employer asked what the reasons prompted him to come back immediately. Meursault said simply, the office work.He keeps watching the life of human beings and their movements while he was standing on the higher apartment.There were characters like Marie,Raymond and others to move up the story.At last,the protagonist  got jailed on the charges of a murder in order to help his friend.The judge trailed him got known his callousness at the coffin of his mother and decided death punishment for Meursault .In prison,one chaplain asked him to embrace the God at the moment,but he severely opposed the thought and warned him to never come again.

The theme outwardly seem proposing material outlook but with the help of several allegorical descriptions ,the author consolidated the free will and meaningless human life on the earth.There are two parts and each part of  the book  indicated the essence in full what Albert Camus thought of.
Posted by Murthy K v v s at 5:59 PM

Email ThisBlogThis!Share to TwitterShare to FacebookShare to Pinterest
Labels: Writers