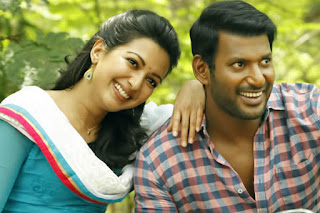 Story: This Tamil dubbing flick is belonged to the genre of Whodunit and the screenplay is pulsating as the movie moves forward with perfect suspense till the last moment of the climax ,bombed with another revelation that was beyond the expectation of the audience.There was a baddie in the town of  fisher folks (in Tamil It was Cuddolore) named "Samba".He has many rivals along with hero's family.All of a sudden he got murdered and the suspects were many to attribute.In addition,the hero's vow to revenge intrigues every one to doubt himself in the case.It was all about the story line in brief.

Story conceived in to the form of movie is gripping,one can't expect the real culprit till the end.Police officer,hero's brother,victim's close relations all these contributed to end the life of  Samba, but with different reasons.The central point elevated  with due cunning and wits and the suspense maintained all along the movie.It proves again how newly a maker of movie could present the flick does matter,but not the unnecessary foreign street dances and lavish costumes.

Performance: Heroine Catherine was beautiful and she has very little importance except some falling in love scenes.Vishal not failed as a mass hero,interestingly fighting scenes were less in the movie,songs appeal none.Back ground score is o.kay.Villian Madhu Singanapalli ,though a small one character wise,steals the show and it can be turning point for his career.Director PandiyaRaj did his job well.He made the audience nail biting and stick to the seats.

Email ThisBlogThis!Share to TwitterShare to FacebookShare to Pinterest
Labels: Movies