Jottings on a bard 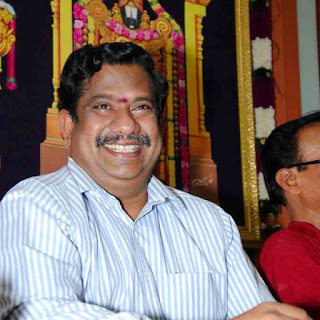 Yesterday,it was a day of reckoning with reverence and sublime pride,as which was to recall the memories of Rallabandi Kavita Prasad on his first death anniversary.Several of such gatherings could have happened all over.His physical appearance faded away ,yet his thoughts are still lingering there in the air,apart from his books anyway.Though he was born at Nemali of Krishna district,his connection with Bhadrachalam is not to be overseen.He employed as a teacher around this place all before ascending to the coveted positions of his later life.

No power stops the light of the daybreak,likewise no barrier hindered the true spirit of erudition.He unfolded his thousand petals lotus while the right time was in favor of him.So his poetry whether it is metrical or free verse bloomed and boomed all across the Telugu world ,in addition his speech swayed wherever he had been...! Rallabandi's service for Avadhana prakriya is well known and he obtained doctorate on the same subject.

As a bureaucrat ,he rose to state cultural department head in undivided state and later allotted to Telangana state where he was apparently marginalized in the game of equations,though he was in that position for a short stint.Almighty 's maze is unpredictable,he chooses different doors for different people to take them back.Perhaps,the bard of yore,busy himself there in the heaven singing his poems with gusto in an ever free mood.
Posted by Murthy K v v s at 5:58 PM