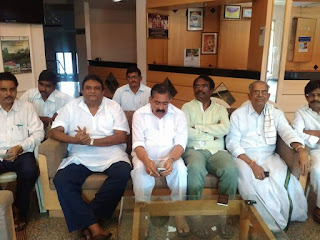 Noted Telugu cinema actor Jayaprakash Reddy visited Bhadrachalam to extend his obeisance to the lord Rama.He met several theater persons of the locality like organizers of Bhadradri Bharati who have been conducting state level drama competitions for the last more than a decade.Actor Jayaprakash said that he would be going to give a show on the stage that depicts number of shades of a soldier's life.It shall be lasting almost 100 minutes as a mono performance,hoping the records to be created through this piece which was translated from Hindi language.

There is little chance in the films to do experiments when comparing the stage and his first love was always the theater itself as he did come through the same channel in to the films.Talluri Panchaksharayya.Pakala Durga prasad,Somaroutu Srinivasa Rao and others are being seen in the above picture.
Posted by Murthy K v v s at 5:24 PM