Farewell to a Ghost : A Manoj Das Story 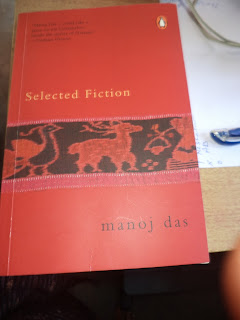 Manoj Das, he is an household name in Odisha as a vernacular writer and at the same time equally known as an Indo Anglican author even beyond the territories of our country.Perhaps he could have been the most acclaimed bilingual  writer of our times.I recently bought his fiction from Amazon people.Thanks for their impeccable packing and delivery on time.

I would like to write a few lines about one particular story " Farewell to a Ghost"  at this moment and the remaining will be taken afterwards as time permits me.In fact,there are 24 stories altogether in the collection.The story encompasses the mosaic of  beautiful  typical life of a village located in Odisha.The writer was telling us his childhood memories through the story.

There was a deserted villa in his village and which is said to be haunted by a Ghost.The writer and his childhood friends were playing nearby that villa and always kept glaring at it with some fear and devotion too.All this is from a judicious distance only.The villagers have an interesting story with that haunted villa,a girl who committed suicide some hundred years ago became a ghost and remain living there.

It was also said that a young man once risked to have entered there was missed mysteriously. Frankly speaking,the Ghost has also become a part of their village,because it does no harm to any onle who respected her with keeping a distance.Here we have to know some back ground about the girl,she was brought here by three Firanghees as a servant maid against her will.She was an offshoot of a hybrid parentage of a sahib and a tribal woman belonged to the Sundarbans of Bengal.The Firangees came here to cultivate indigo crop over large tracts.She tried many times to escape from the place as she was punished severely by her masters.

She was unfortunately killed by her lover as the latter made efforts to swindle the wealth amassed by Firangees.He flew with money and gold.The masters later harassed the villagers and they had gone away leaving the villa to its fate.All these incidents had faded in to a painless memory.Villagers started offering new cloths,and other puddings to the Ghost of the girl on the occasions like marriages and birthdays.

Government eventually decided to demolish the villa to use the place for some other purpose.It made writer and his friends pity as they would not have another place to gossip over.The ghost was sent to a palm tree with due respect,with chanting concerned mantras.While coming in to village ,especially nights, he was gazing at the palm tree with the same awe.That becomes a habit whenever he embarked the road .

After vacation,the writer promoted to high school.And he admitted in the school located in a nearby town,almost fifteen miles farther.Town was all new to him and engrossed in various activities of the school.He gradually forgot the ghost.

After some months , he gazed at the palm tree and felt numbed.The tree was dead ,struck by lightning.Its charred branches were crumbling.The writer resumed walking with a heavy heart.As years passed by,he too got out of the village on his employment.Now his visits were remain rare.And the new generation children of the village were ignorant about all these things.They were just afraid of Ghosts,that's all.

The story ends with a note of  sigh and left you with loads of  childhood memories.Narration is gripping and choosing words for the story is commendable as it touches the surface of subconscious mind.