A Little Known story of Manoj Das : The Murderer 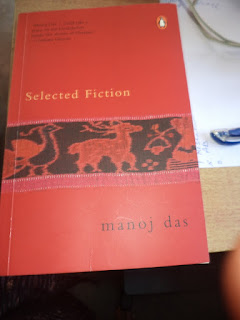 Last time, I have elaborated a story of Manoj Das,Farewell to a Ghost, that was taken from his selected fiction.This time I am eager to express my opinion on another story titled The Murderer.Don't be taken away by its very name as it is of bloodshed and hard core criminals etc.,The real chill is without all these things.Mostly the backdrop of Manoj Das stories based on village life and its daily routine.Sometimes though which seemed simple with likeness of traditional granny stories,all they have a unique quality of interesting narrative.

Writer was telling his childhood experience in the story.He was,then,studying in a primary school.Living in a village along with his mother and maternal uncle.One day his uncle told him that they were receiving a well known man Binu for the dinner ,his name was synonymous with awe striking murder.Everybody fears his name.Binu murdered not only an ordinary man but a great money lender and litigant Dabu Sahukar.He had no compassion in the matter of fulfilling his mundane desires.Uncle is Binu's best friend,that's why he could have accepted to attend the dinner in the night.So our boy was enthusiastic to see the man ,especially how a murderer could be in appearance.Atmosphere tuned stormy,his mother asked him to go to bed,but he refused it ,how would he see Binu, the murderer, if he got bedded early.

In fact,Binu was a bodyguard to Dabu Sahukar.He always follow his master wherever  he went ,particularly when he was required to travel with a fat purse.Binu's wife was a servant maid at his master's house and she was found dead at the pond while cleaning utensils, on a fateful day.Villagers thought there was Dabu Sahukar behind the death.Binu knew it but not expressed his anger openly.One night ,while the two were returning from a nearby town ,in that dense woods,Dabu Sahukar disappeared mysteriously.Police arrested Binu,but there was a rescue came in the form of Bhupal Singh,a rival of Dabu Sahukar.He helped Binu to come out of the station and now Binu became a bodyguard of Bhupal Singh.As years passed by, Binu got reputation as a murderer and the villagers started giving him due respect.

When the writer woke up on the next morning,he realized that he had missed the sight of Binu.As a child he was not able to control the dozing state.However,after some years,he heard one interesting story about Binu.Dabu Sahukar appeared in the village surprisingly after some years in the form Sadhu Baba.On inquiries ,he told that he had lost in the woods as he had seen a shrine in the midst of forest and went to see that.An ascetic was there ,with his blessings I recalled my past life and became his disciple.

Binu was now remained as a laughing stock with the appearance of Dabu.But Sadhu Baba (Dabu) understood Binu's position and he wanted to help the poor guy's reputation.He said to the crowd while he was delivering discourses " who said that I was not murdered..it's true".People came to a conclusion that some great power helped Baba to regain his life.Now Binu was at comfort and thanked Sadhu Baba silently.

Thus everything settled safe.The story tells how gullible our people in some matters like these.How an image made with a stroke of blind belief is described well.Anyway,Dabu and Binu ,both are winners at last.
Posted by Murthy K v v s at 5:37 PM