Gifted Children at their best 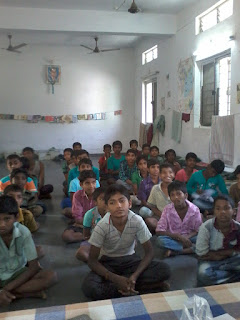 It was a day of joy with children and their rendering of poems from the satakams of  Vemana and other age old poets.All these poems are invaluable gems in those own right to enlighten every human being.Not only that,poems of its kind keep kindling new lights when they were being read out.The competition conducted at Ananda Nilayam.In olden days,it was called by the name of Home of orphan children.The event has taken place at the behest of Manojna cultural society and its chief organizer Mr.Tulasi Das.

Ananda nilayam is just behind the bus stand complex of Bhadrachalam.Mostly parent less children are taking accommodation  here and the state government is running this hostel.Totally seventy five children are boarded.All the children are so enthusiastic about the recitation of poems.Very humble in behavior.  Mainly 6th,7th and 8th class children are permitted for this.

One boy named by K.Nirmal Prasad memorized 25 poems at a stretch and got first prize.J.Venkata Ramana has won second prize while Bhagat Mahendra got third prize in the race.Along with these,all other children were provided by consolation prizes.There,with the reverberation of Vemana's four- lined time tested poems of subtle truths the place indeed turned in to an Ananda nilayam.
Posted by Murthy K v v s at 9:21 PM