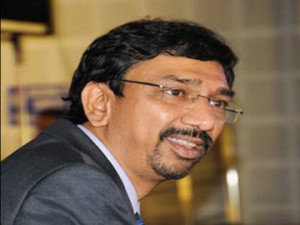 Acclaimed senior journalist Arun Sagar's demise strikes a chord in the temple town of Bhadrachalam.He did commendable job in terms with literary activities apart from being an instrumental one in establishing three popular TV channels.Arun was the editor with TV5 channel at present and which was the last rock standing on before plunging in to the eternal ocean of oblivion.As per sources,his father TVR Chandram worked in undivided communist party and he had traveled with CPM later on.His father Chandram 's name is popular as one of the most sincere and dedicated worker.Ascended to state level leadership but his last days were not  luxurious comparatively ,led a simple life on to his death.

Although Arun Sagar born at Bhadrachalam,educated at Kothagudem and Visakhapatnam.He started his career of journalism with Suprabhatam magazine and switched on to various ones before he entered in to electronic media.Proletarian outlook with progressive thoughts is evidently seen in his poetry and sprawled over entire his life.May his soul rest in peace.
Posted by Murthy K v v s at 4:42 PM