Paeans for the determined 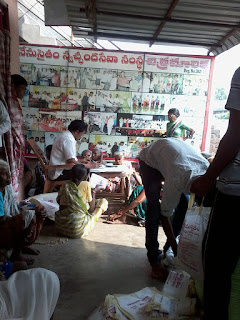 The other day, I was invited by I.Japan Rao garu to accompany him.He did not divulge the place where we were heading,but certainly which was of substantial to reckon,I thought..After having refreshments at some awaited people,at last reached the destination.It was the headquarters of a social service organisation called "Nenu Saitam" (Me too..) named after a well known metaphor of  poet Sri Sri used in his magnum opes  Mahaa prastanam.

It was quite known for its philanthropic activities for a couple of years,through the news coverage of several acclaimed news papers.Be it of donation of provisions to the victims of fire and other natural calamities,needy children and other unfortunate ones.As we have entered the place,there was a program of rice bags distribution to the senior citizens going on with intense interest.All the place was abuzz with the activity.

Organisation chief Bheemapaka Naga Raju garu and other volunteers were seen.All they were beyond haughty pride and indulged in their work ,oblivious of their surroundings. On that day ,the rice was being distributed with the financial help of some local doctor.Donors would come forward to help the needy people through the society and its team members.P.Tirumala Rao garu and academician  Venkatarami Reddy garu received us well and distributed some bags through our hands also.Happened to see the pictures and news coverage of org's activities and felt happy about this meaningful magnificent work.
Posted by Murthy K v v s at 11:11 PM