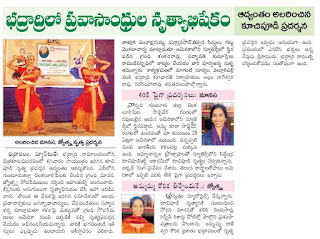 Kuchipudi, the very own classical dance form of  Telugus originated through Saint Siddhendra Yogi.Yesterday at Bhadrachalam there was a scintillating performance of Kuchipudi rendered by Newjersy (Raritan) resident sisters Manasa Grandhi and Jyotsna  Grandhi.Annamacharya and Thyagaraja kritis were taken mainly for their performance, all it was staged at Chitrakuta mandapam in the premises of  temple complex.All the way they have come here to give recital as it's the abode of Lord Rama and to fulfill the wish of their grand mother as which disclosed to the press.Their family based at Chilakaluri pet of Guntur district,Andhra Pradesh.

Chief priest of the temple Jagannadhacharyulu,Vedic Scholar Sanyasi Sharma extended them with Asirvachanam and wished them to grow in their pursuits.They were said to be given almost 40 performances both in India and US.Expressed their happiness being at this place to showcase their ethreal skills in front of the Lord's presence.
Posted by Murthy K v v s at 10:37 AM