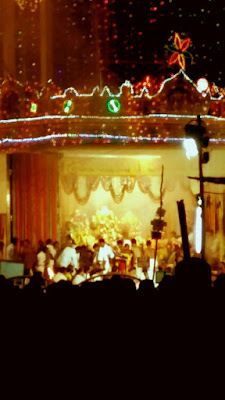 Today at Bhadrachalam the year long awaited event "Uttara Dwara Darsanam" has materialized in the sacred  premises of the  temple built by historic devotee Saint Ramadasa in the 17 th century.From the  wee hours,devotees keep coming to the north  gate of the temple since the celestial couple of Lord Rama and Sita would give Darshan from the north gate of the temple.This particular celebration will always be celebrated only once in the year, especially during " Mukkoti Utsavaalu " ,lasted 11 th to 21 st in the month.It is believed that there would not be another birth for one who witnessed this north gate arrival of the Lord Rama with his Consort.
Posted by Murthy K v v s at 5:53 PM