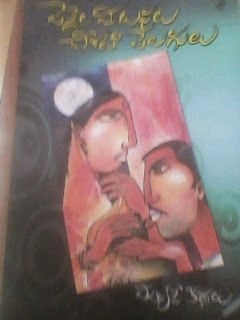 Last time,we have talked about the two stories in the collection.Let's take another two stories for our consideration.The third piece of work is "Varna Chitram".It describes how identical the thought process of writers' in almost similar conditions.Mahendra and Vikrant both were story writers,in a queer way,they had been lived in a same village and wrote a story each with the inspiration of a same dame.Vikrant's story happened to have published first and when the Mahendra's story got published in the later years,one distraught reader who had read both stories opined that the latter's, must have been a copy one.He informed it to the editor of the concerned magazine.Then on brisk exercise of both writers on the subject,they realized that Vikrant and Mahendra wrote on the same subject as they have lived in the same location.So similarities with surroundings and other descriptions were co-incidental.Vikrant wrote first part of the dame's life and Mahindra told about the later stage of her life.That's why with slight exceptions the plot looked like a same stream of line.

Everything remains happy as ever.But the concept taken by Malyasri here in this story is quite possible in the mundane world to prevail elsewhere.That's what our labyrinth of inner world filled with.Hillocks,banks of river Godavari and hamlets nearby there,all these eye feasting phenomena will take the reader in to the fulcrum of Bhadrachalam.

And the fourth story is Gundelu-Gunapalu.A typical love story between a banjara girl and a nomadic drama artist.Hero was an orphan and he was attracted by Bijili,a country side juvenile.At climax both were killed in a plan of  jealous relative of heroine.Writer highlighted the sacrifice of them and were  remained in a song which was known among the people as a folklore piece of work,that could have been prepared by some anonymous one.

Next time come back with another two pieces of work from the same collection..!