Son of the Soil,at his best 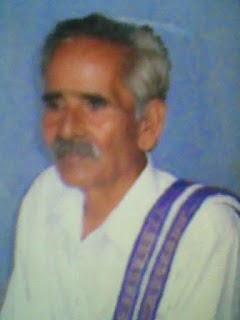 Here I would like to express in a  few words about a common man,nay.. an average peasant lived in a remote corner of our country,Charla village,Khammam district of Telangana and his contributions towards the society.His name was Maineni Sankara Rao (1937-2013).In fact, his family migrated from Guntur area long back.Being a  son of soil,he never satisfied with his work,he interested in many subjects like physics,Chemistry,Maths,Social sciences,herbal medicine,Yoga and many other to reckon.We should know that his educational qualification was only 5th class.

He used to gather concerned subject books from many sources to read and assimilate them.Not only that,he prepared his own notes on his readings.Don't think that he was going to attend some competitive exams.It all he did sheer out of his love for knowledge and enjoying the varied subjects.In the field of farming too,Maineni kept experimenting with different crops.

What all this reading and knowing facts fetches a peasant..? nothing..the villagers opined so but he was a different man with his genius.He didn't care other things to pursue his interests.He could explain theory of relativity as easy as he spells out the intricacies of Kali das's classics.No subject spared from his gaze.

He was not a mere talker but a man of action too.At the outset of rainy season,he all come out for planting different saplings beside the roads.All the plants were of medicinal use and of being given shade to people and animals alike.After his demise,I happened to visit his house.His daughter Padmaja on my request shown me his hand written manuscripts.Awestruck....he wrote on science to spirituality ,ancient classics to Yoga sadhanas.Altogether some hundreds of pages ..so original thoughts...and he never bothered to send them to publish .

Are they destined to be remained so..hiding his intellectual sun behind the power of merciless ramports of time...? many questions began to lingering in my mind.
Posted by Murthy K v v s at 3:47 PM