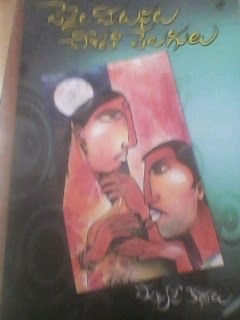 I would like to introduce some Telugu stories which all have placed in a collection,titled as cited above and the writer is Malyasri.Hailed from a remote village,Mogalla Palli of Charla mandal and which falls in Bhadrachalam division.He focused issues mainly where he belonged to,plot wise and narration wise the reader discerns the temperament of its own.Malyasri entered in to other avenues like Children literature,Drama and poetry with the spirit of progressive outlook.

He understood the in things of basic Indian rural ambiance and its dynamics as he had served in rural places as a government employee, for some decades.All his encounters with ground level realities reflected in it.There are 12 stories in the collection.Right now,let's have two of them for our consideration.

First story is "Vennela Malupulu".Three principal characters namely Shouri,Shekaram and Shyamala are there.All the story being happened while they were travelling by a cart.First It would be seemed as a romantic escapade,yet which have taken another turn by its ending that reader never imagined.The narration of landscapes and its intricate details clubbed with emotional wrapping of main characters brought us back to the place of some unknown tiny village.This story was published in Andhra Prabha (Weekly) way back in 1985.

Let's get in to the second story,"Oka Seeta Kadha".This is about a working woman and her gamut of afflictions and some heartening sequences.It describes how a genuine friendly relationship was mistaken for some sordid affair by onlookers.Canvass taken for this is rural. she works in medical department and has to conduct surveys in the part of her job.A co-employee basing on the same location befriended her and kept sharing their personal blues each other which triggers an unknown relation but certainly not amorous.Eventually they parted out and the story ended up with a true meaning of togetherness sans any sacrifices or manipulations.

Let's meet next time with another two stories from the same collection of stories..!